SERIOUSLY: You’re Not As Tough As You Think You Are!
Reckon you have what it takes to get crossfit fit? Try this short routine to find out

Sculpt your back and core. Humbled. That’s how Julian Alcaraz felt during his CrossFit baptism. Alcaraz was teaching military-style fitness boot camps in Los Angeles when he watched the 2011 CrossFit Games live and was inspired by the athletes who swam in the ocean, walked on their hands and swung across monkey bars. Becca Voigt placed third, and Alcaraz sought out her gym. His first WOD involved overhead squats. “Even though I was strong, I didn’t have the mobility to do the exercise,” he says. But the lesson he learned is how CrossFit can establish a foundation for functional movement. He worked out daily and in just three years qualified for the 2015 Games. Now he coaches at CrossFit Training Yard in North Hollywood, California. He’s inspired every day by the progress he witnesses in his students. One of his favourites is a grandmother in her sixties. She taught him the importance of being patient in the process. “All it takes is a willingness to learn and a desire to be stronger,” he says.

Three back-to-back sets of thrusters (squat to presses) and pull-ups. “ I t’s a killer metabolic workout that’s also the cardio equivalent of a maxeffort, half-mile run,” says Douglas Chapman, a CrossFit coach. “It’s the worst of both worlds.” Alcaraz’s best Fran time is 2:24 (minutes; seconds) Do It:Alternate between thrusters and pull-ups for 3 sets, minimal rest.

Score: Time to completion: Under 5 minutes is considered strong. Thrusters – Using an overhand, shoulder-width grip, grab a 45kg barbell from a rack at shoulder height. Keep your elbows up and do a squat. Explode up and press the bar overhead. Lower the bar to shoulder height and repeat.

Pull-Ups – Stand under a pull-up bar, jump up and grab the bar using an overhand grip that’s just beyond shoulderwidth. Pull up until your chin clears the bar. Then lower yourself until your arms are fully extended. Repeat. 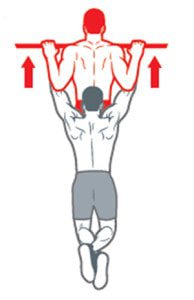 Four Tips For The Crossfit Rookie: Find a box that prioritises you – “If the coach tells you to attend a group class before he knows you, your history, and your goals, stay away,” says Douglas Chapman of CrossFit Ann Arbor. Think low trajectory – “Form and frequency always come before intensity,” says coach Ben Bergeron. Attend class three days a week for at least five weeks before even thinking about adding weight. Scale down the WOD – Don’t be too proud to do an easier version of an exercise in your WOD. That’s how you improve.If you’re not sure a move is right for you, use this rule: If it causes dull pain in your muscles, go. Sharp pain in your joints? Skip. Boost your mobility hygiene – Practicing mobility should be like brushing your teeth, says PT Kelly Starrett. “Do it daily.” His 10-minute drills are available at Mobility WOD on YouTube.

Want to surf like a pro? Surfing can be a difficult feat to conquer and you need to train your body in a...

Took A Gym Break Over The Holidays? Here’s How You Get Back On Track

'Fess up, we know you took a gym break. Were the holidays spent over-indulging and chilling by the pool?...

You’ve probably heard that 95% of all diets fail. In other words, almost everyone who loses weight fast...