MH Tested: iFrogz Summit Wireless Earbuds
By Thomas Okes Cables are the worst. They’re long, tangly, and most annoying of all, visible. I can’t tell you how many times I’ve arrived at the starting line of a race only to get looked up and down and told, Dude, they’re gonna pull you out if they see those earphones. Who’s they? Race […]

Cables are the worst. They’re long, tangly, and most annoying of all, visible. I can’t tell you how many times I’ve arrived at the starting line of a race only to get looked up and down and told, Dude, they’re gonna pull you out if they see those earphones.

Who’s they? Race marshalls, and they hate anything in their runners’ ears. So much so that they will regularly reach across and yank people off the road for daring to brighten up their run with a few songs. Apparently, it’s considered dangerous to wear them during a race? I’m not sure why, if the roads have been closed to traffic, and I’m not sure either that it’s a rule that needs such crazy strict enforcing, but anyway. This is the world we live in.

My solution: wireless earbuds! Specifically, the iFrogz Summit Wireless Earbuds, which use Bluetooth to connect to your phone and stream the sweet sounds of success directly into the pleasure centre at the back of your brain.

I’ve now run four races with them, and they make for an impressively enjoyable ride. I also use them on training runs, and they’ve come along for everything from 5km Park Run sprints around the track-like Rondebosch Common and short, steep climbs up the Constantia Nek contour path, to big-time races like the Sanlam Peace Trail and Soweto Marathon.

I’ve dropped them more than a few times, pretty sure I stood on them at least once as well. They also went for a dive off a cliff on Table Mountain. They survived all of it. Better than I did, even. Leaving them at home, after all we’ve been through by now, just seems unfair.

These ingenious little rebel-rousers come with a handy receiver, two short cables running into each bud and a microUSB port for charging. The wireless hub has three buttons, which all recognise short and long presses, so you’ve got a total of six music-control functions – from hell-yes-turn-up-the-jam to pause-let’s-wait-for-this-red-robot.

Once you’ve pressed the power button, connected them to your phone, a blue light will start flashing, a British woman will tell you, “Connected”, and bam, you’re good to rock out while running, for hours.

In the beginning, I’ll admit, I got annoyed at how they kept falling out. Until I realised I was doing it wrong. Now, I wedge the buds deep into my ear sockets and wrap the cables and receiver around the back of my cap or beanie. If I’m not wearing either of those, I’ll use the wings to keep them in.

Yes, wings: these headphones come with little pieces of rubber that look a lot like they belong on the Greek god Hermes’ sandals. These press into the folds of your ears to guard against gravity, and they really work, too. Plus, it turns out I was using the wrong buds – you’ll find three size options right there in the box, if, unlike me, you bother to look. 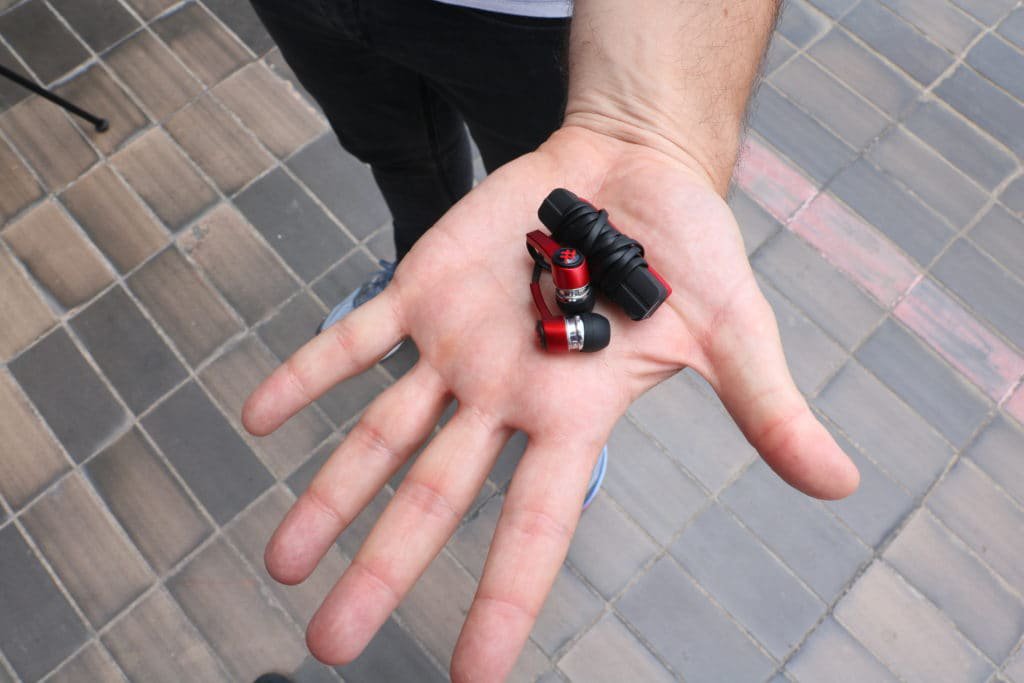 Another great feature is the fact that they’re noise-cancelling. While this isn’t necessarily so important when you’re out on the road, it’s great when you’re at work, trying to block out the sound of your colleague’s bad jokes. The battery’s not bad either. At one point I took them out for a 20km training run on Saturday, and the 21km Gun Run the next weekend, and then a 28km slog over Boyes Drive seven days later, and they were still playing at the end of an arduous three weeks on a single overnight charge.

But I’ve been most impressed with the connectivity. (Connectability? You know what I mean.) These earbuds just won’t disconnect. I use Apple Music, on my iPhone 7, which I carry snugged away in the back pocket of my running tights. That pocket is pretty far from my ears, and even with my legs going as hard as they can, somehow the signal stays connected and the tunes keep coming.

VERDICT: The iFrogz Summit Wireless Earbuds are great. Running, commuting, working – all of these are pleasant experiences with this pair of buds in my lugs. The only reason not to wear them? I’ve heard race marshalls have a habit of confiscating them. That’s how good they are.

Ready to buy? They’re on at a ridiculously low R499 at Incredible Connection

Earn Your Muscle The Hard Way With This MMA Workout

Took A Gym Break Over The Holidays? Here’s How You Get Back On Track

'Fess up, we know you took a gym break. Were the holidays spent over-indulging and chilling by the pool?...

You’ve probably heard that 95% of all diets fail. In other words, almost everyone who loses weight fast...